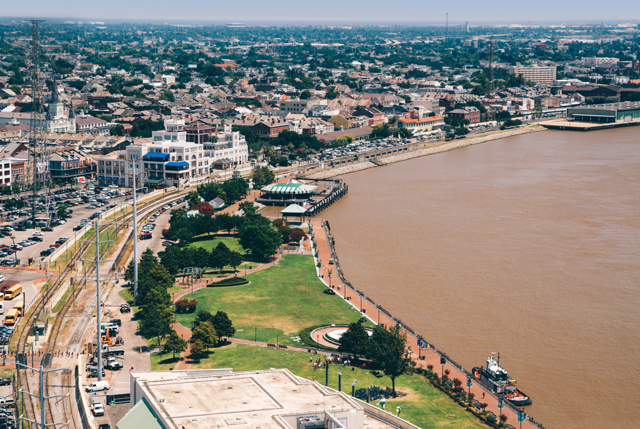 The Board of Commissioners of the Port of New Orleans operates and maintains properties along important waterways in New Orleans in order to conduct its various maritime activities. In 2010, the City of New Orleans overhauled its zoning regulations by adopting the Plan for the 21st Century (referred to as the “Master Plan”) and a new Comprehensive Zoning Ordinance (the “CZO”). The new categorizations of the three waterfront properties owned by the Port inhibited the Port’s ability to use the properties to enhance its mission and the economic viability of the State of Louisiana. Accordingly, for the past several years, through administrative channels and direct discussion with City officials, the Port attempted to resolve the issue by following the process to have the Master Plan amended to allow port-related industrial uses and development on the three properties.

The issue at hand went beyond a traditional zoning dispute and encompassed constitutional conflicts between the Port and the City. Understanding the economic importance of the Port’s authority over the Mississippi River, Inner Harbor Navigation Canal and Gulf Intracoastal Waterway, among others, the framers of the 1974 Constitution provided the Port with constitutional protection in Article VI, Section 43, such that its “powers and functions, structure and organization, and territorial jurisdiction” cannot be diminished without a “favorable vote of two-thirds of the elected members of each house [of the State Legislature].” La. Const. Art. VI, Section 43 (1974). In fact, all deep water ports in existence at the time of the 1974 Constitution were given this special protection.

In somewhat parallel fashion, Article VI, Section 4 of the 1974 Constitution grandfathered the jurisdiction and autonomy of those municipalities whose home rule charters were established before the 1974 Convention, one of which is the City, and provided that:

Every home rule charter or plan of government existing or adopted when this constitution is adopted shall remain in effect and may be amended, modified, or repealed as provided therein. Except as inconsistent with this constitution, each local governmental subdivision which has adopted such a home rule charter or plan of government shall retain the powers, functions, and duties in effect when this constitution is adopted. If its charter permits, each of them also shall have the right to powers and functions granted to other local governmental subdivisions.

As applied to the three properties at issue, the City’s Master Plan and corresponding CZO, both initiated pursuant to the authority granted in Section 4 and the City’s home rule charter, appeared to be inconsistent with Section 43 of the 1974 Constitution, because the zoning as applied here diminishes, reduces and withdraws from the Port its powers and functions to operate as a deep water port on the properties it owns without being authorized by a two-thirds vote of the state legislature.

In February, upon the well-drafted recommendation of the City Planning Commission, the City Council voted to approve the Port’s requested amendments to the Master Plan to permit port-related industrial uses on the three properties recognizing the important state-mandated authority of the Port to operate deep water ports along the state waterways running through New Orleans.