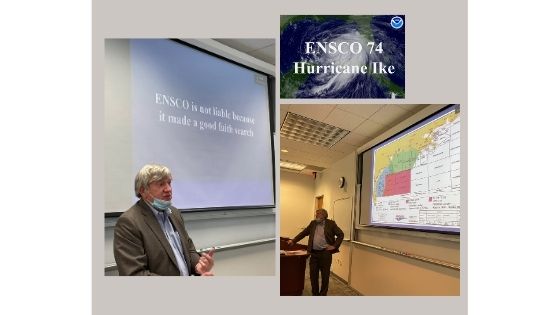 The case involved the ENSCO 74, a three-legged jack-up rig reported missing after Hurricane Ike tore the vessel off its legs. Despite a diligent search, the owners of the rig (Flint’s client, Ensco Offshore Company) could not locate the ENSCO 74 after the storm. Months later, a passing ship “found” the sunken rig approximately 87 nautical miles from its original location when the ship ran over the wreck. After a trial in Houston federal court that ended in Ensco’s favor, the Fifth Circuit Court of Appeals affirmed in all respects.

Flint was invited to present the guest lecture by his colleague David Sharpe, who teaches the Towage & Offshore Services class at Tulane Law School. Sharpe is also a Lugenbuhl shareholder.

If you would like additional information on the ENSCO 74 case, click here to download a handout containing abridged versions of the district court’s findings and conclusions followed by the Fifth Circuit’s affirming opinion.

Delos Flint, Jr. leads Lugenbuhl’s Admiralty & Maritime practice section with over 35 years of experience in both commercial and civil litigation within the maritime and energy fields. Flint’s online bio is available here.

David Sharpe has nearly 30 years of maritime law experience, focusing his practice on risk management in the marine-service market. In addition to his law practice, he is a frequent speaker, author, and editor, along with his role at Tulane Law School as an adjunct professor. Sharpe’s online bio is available here.

Founded in 1986, Lugenbuhl, Wheaton, Peck, Rankin & Hubbard is a nationally recognized full-service law firm specializing in core practice areas including admiralty and marine, bankruptcy, insurance, litigation, real estate, and estates and trusts. The firm has evolved and expanded with offices in New Orleans, Baton Rouge, Houston, and Gulfport to better serve the needs of its national and international clients. For more information, call (504) 568-1990 or visit lawla.com.